Are you looking for a GED science study guide because science seems difficult or abstract? It sounds hard, doesn’t it? It involves math and research and reading. The good news is, you don’t need to study anything too complex. After all, there’s a lot of science in the everyday world. This study guide will tell you everything you need to know, and you’ll get started on the fastest path to pass the GED. You’ll learn tips and tricks to learn quickly.  It won’t be too hard!

A good place to start studying is a free, online GED science practice test to find out how you’re doing! It will help you find out what you need to study first.

Is the GED science test hard?

The GED Science Test can be hard if you’re not prepared, but it doesn’t have to be. Here are some quick tips on how to be prepared:

A good online prep course or GED science book should help you learn what you need to know. Then, the GED science test can be easy!

What kind of science is on the GED test? 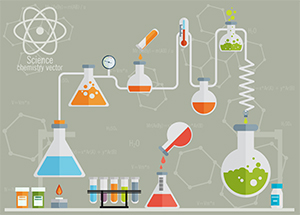 Focusing on these skills will help you learn quickly!

How many questions are on the GED science test?

How many questions can you get wrong on the GED science test?

The good news is that you don’t need to get every question right on the GED test! The science test has about 40 questions, and your score will be between 100 and 200. You only need to score 145 to pass (or 150 in New Jersey). That’s about half way through the score range! The exact number of questions is different on different versions of the test, but you might be able to miss up to 20 questions on a 40 question test. It’s a good idea to aim higher, but know that you have a lot of room to make mistakes.

How long is the GED science test?

The GED Science Test is 90 minutes long with no break. That’s an hour and a half, and just over 2 minutes per question.

How can I pass my science test?

Passing the GED Science Test depends on a number of skills. You need skills in reading, math, and of course science! It’s a good idea to study reading and math first, and then try the test. That way, you’ll have some starting skills.

You don’t need to focus on understanding everything about science. Focus on learning how to:

If you can do these three things, you should do well on the GED Science test!  Remember, it’s not about memorizing one piece of knowledge that may or may not be on the test. It’s about reading, evaluating, and analyzing.

Where can I take the GED science practice test 2019?

A practice test is a great first step to see what’s on the test and what you need to study! Take a free GED Science Practice Test online today!

If you’ve already taken a free test and you think you’re ready to pass the test, it’s a good idea to also take the GED Ready first. The GED Ready is a $6 official practice test from the GED Testing Service. You can find it at GED.com.

Here are three recommendations of GED science books to help you pass the test!

A lot of the core skills on the science test are reading and math skills, so be sure you have science-based math and reading skills. You can study the reading and math GED Science skills in the Essential Math Skills and Essential Reading Skills workbooks.

Jump-start your studying with these sample Essential Skills science worksheets!

Is there a GED science cheat sheet to help me understand the test?

If you want a quick and easy reference for what’s on the GED Science Test, check out our GED Science Cheat Sheet below. It gives you an overview of what you’ll find on the test. 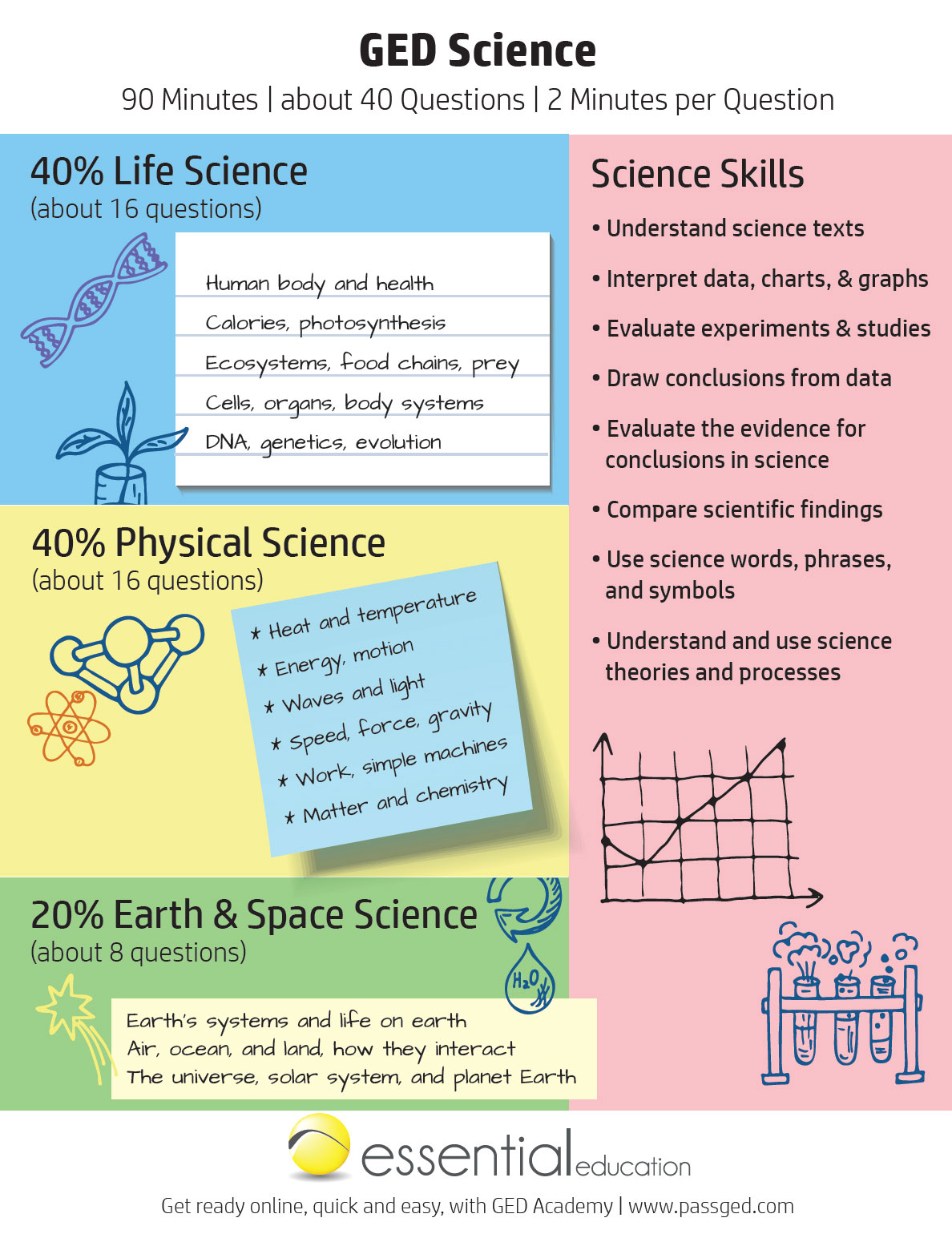 What are the GED science short answers and extended response?

What about the science test? Some sources say that there are no short answer questions anymore… Well, that might be some confusion because the essay was removed from social studies. The 2018 GED Technical Manual lists the following question types for science:

The following science subjects are on the GED test.

As you can see, life science covers a lot of material! Don’t worry. You don’t need to know all the details. You do need to be able to read information, understand it, and answer questions.

A scientist collected the following data about the trees growing in a forest over 10 years. 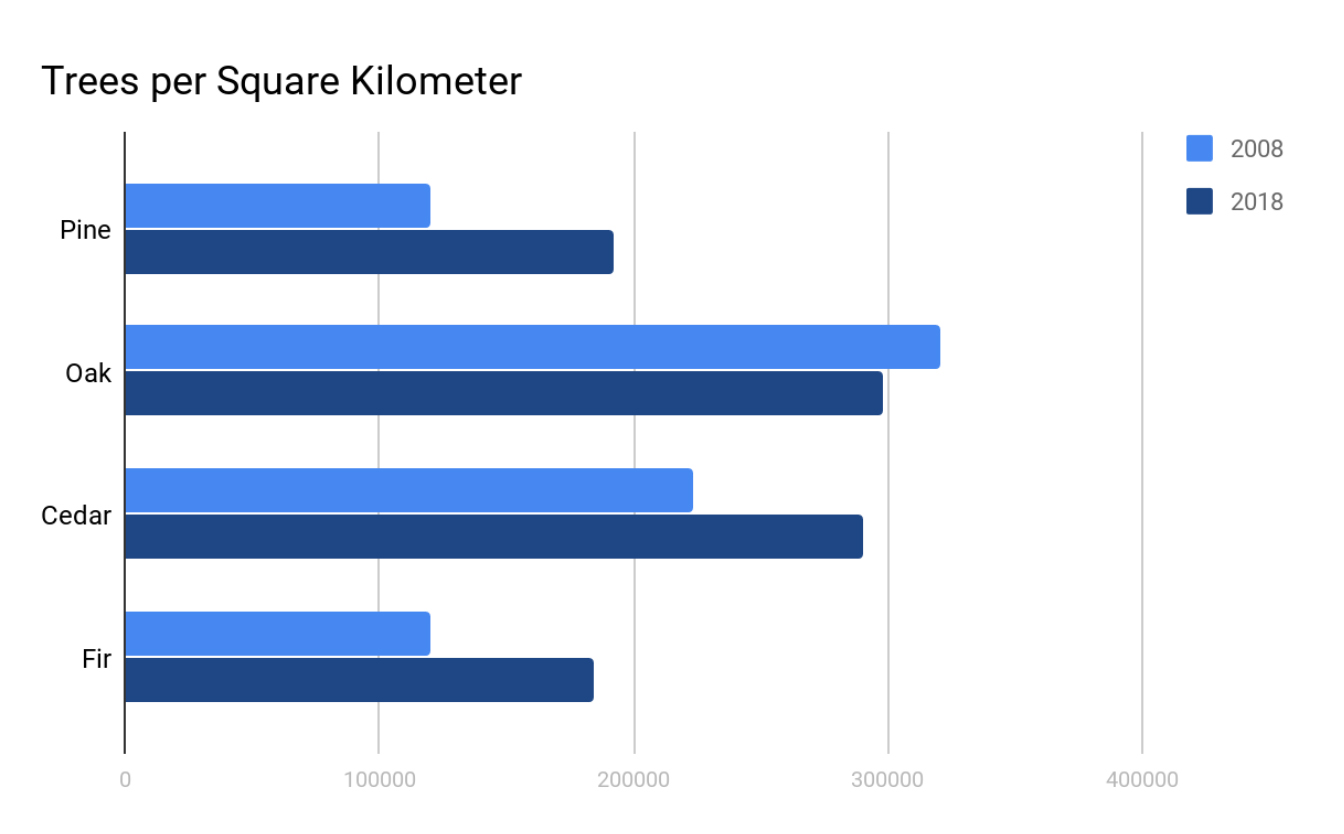 The physical science on the GED test could cover any of these topics:

Most of the time, you’ll need to know big ideas about physics, like that energy is conserved and that two sides of a chemical equation have the same number of atoms. You’ll use big ideas and science skills to answer questions.

In a chemical equation, there should be the same number of atoms on each side. Choose the correct answer to complete the equation, which shows that combining methane plus oxygen creates carbon dioxide and water.
CH4 + ________O2 → CO2 + 2H2O
Choices:
Answer: 2
A molecule, such as H20, tells you how many atoms it has in it. Water has two hydrogen atoms and one oxygen atom. The number next to a molecule shows you how many molecules there are. On the right side of the equation, there are 2 water atoms and 1 carbon dioxide atom. The carbon dioxide molecule has 2 oxygen atoms. The water atoms each have 1 oxygen atom. On the right side, there are a total of 4 oxygen atoms. The left side also needs 4 oxygen atoms. Since an oxygen molecule has 2 oxygen atoms (O2), you need 2 oxygen molecules to get 4 atoms.

The Earth and Space Science questions could include information about any of the following topics:

If you understand how to read about science and some big ideas about how science works, you’ll be able to answer these questions.

What Is Mercury Like?
The surface of Mercury looks much like Earth's moon, and it is marked with many impact craters. Mercury has almost no atmosphere. Because it is so close to the sun, it can be extremely hot. For example, on its sunny side, Mercury can reach a scorching 800 degrees Fahrenheit. (However, Mercury is not the hottest planet in the solar system—Venus is the hottest planet.) On its dark side, Mercury gets extremely cold because it has almost no atmosphere to hold in heat and keep the surface warm. The temperature can drop down to minus 300 degrees Fahrenheit. Sunlight never reaches into the bottoms of some craters near Mercury's poles, which could mean that ice may be inside those craters, where there would be constant freezing temperatures.
How Has NASA Studied Mercury?
Because it is so close to the sun, Mercury is difficult to study from Earth. No humans have ever traveled to Mercury, but the first robotic spacecraft to visit Mercury was Mariner 10. It flew by Mercury in 1974 and 1975. Mariner 10 was able to take pictures of less than half of Mercury's surface. Following Mariner 10, no spacecraft visited Mercury for more than 30 years. Then NASA's MESSENGER flew by Mercury in 2008 and 2009. On March 17, 2011, it began its orbit of Mercury. MESSENGER will map Mercury by taking pictures of the planet's surface, including some areas that have not been seen before. It will also collect data on the composition of the surface rocks, and measure the heights of mountains and depths of craters and valleys. Some data collected by MESSENGER will help scientists to understand what the inside of Mercury is like. MESSENGER will let people learn more about Mercury than they ever have before.

Source: Adapted from “What Is the Planet Mercury?” by David Hitt, March 30, 2011. Available at: https://www.nasa.gov/audience/forstudents/5-8/features/nasa-knows/what-is-planet-mercury-58.html

Based on the article, which piece of information do scientists NOT know about Mercury?
Answer: The structure of the center of Mercury.
The article says that Mercury has impact craters. That implies that scientists know that asteroids or other objects from space have crashed into the planet. The article also explains that, because of Mercury’s lack of an atmosphere, its temperature rises and falls sharply. The article also tells the temperature range on the surface of the planet. However, the article says that MESSENGER will help scientists understand the inside of the planet. That implies that scientists do not know what the structure of the center of Mercury is like.

The science test covers the following skills in science.

If you focus on learning these skills, you can pass the GED science test!

10 GED Science Tips and Tricks: How to Study for the Science Test

The GED Science Test can be tricky if you’re not used to reading about science and looking at data. The best way to study for GED Science is to find a science program that specifically prepares you for the GED skills. Applying science skills is more important than knowing details about life science, physical science, or Earth and space science. Here are some tips to get you started.

Reading and math are foundational skills for science. It’s best to start with the foundation first!

The best way to start out studying for the GED science test is to take a practice test. First, it gives you experience with the types of questions you’ll come across on the GED test. Second, it tells you what topics and how much you need to study. Next time you take a test, you’ll do better because you’re more prepared. Take a practice test now to get practice with GED science questions and find out if you’re ready for the test.

3. Study More Quickly and Effectively, Here Is How

For the science test, you need to understand some science! A lot of the test is reading and math (especially data!), but how do you get the science knowledge you need? Here’s how to learn science better:

5. Learn about Science Studies and Experiments 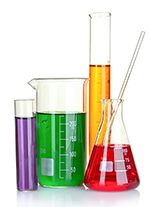 Get familiar with the ideas in scientific studies and experiments. Here are some vocabulary words to help you get started:

6. Read the Text, Examine the Graphics

Test-taking is a stumbling block for some students. Here are some good habits for taking the test:

Science includes a lot of processes and physical structures. Try making your own diagrams to understand some important areas of science. You can make diagrams to show or explain:

10. Focus on Evidence and Data

Evidence and data is an important part of the GED Science Test. Does the data from an experiment support the hypothesis or not? What would you conclude? You should be able to:

Checklist: What You Need to Know to Pass the GED Science Test

To pass the GED Science test, you need to understand science topics and science skills. Here’s what you need:

GED Academy provides complete preparation for the GED Test. Everyone starts at a different level, but many students can get ready in a few weeks. With about 20 or 30 hours of study, you could be ready for your GED Science Test.

You won’t just get a science course. You’ll also get complete reading and math courses that include skills you’ll need to understand science data and science texts. The science learning plan will get you ready quickly and easily, including lessons in science reading and science math.

With GED Academy, you can take practice tests, track your scores, see what you’ve mastered, and track your study time. It’s a complete study system in one place, with everything you need to know.

Are you ready to get started? Take a look at how GED Academy works.

Free Resources | Prepare for the GED